It’s the late 1960s, and story stocks like conglomerates and computer leasing companies are going to the moon. The consensus is that this is madness and it will all come crashing down.

In the throes of writing his classic The Money Game, George Goodman canvasses his friend, the Great Winfield, for insight. Ol’ GW can’t bring himself to buy the tech stocks: they’re expensive and he remembers all too well the early-60s bear market and the collapse of story stocks. The memory, the flickering déjà vu, they leave him frozen. His performance is lagging.

“My boy, our trouble is that we are too old for this market,” the Great Winfield laments. “The best players in this kind of market have not passed their twenty-ninth birthdays. This is a Kids’ market.”

The Great Winfield introduces Goodman to his solution to the current market: Kids. “This is Billy the Kid, Johnny the Kid, and Sheldon the Kid. Aren’t they cute? It’s their market. I have taken them on for the duration.”

Billy the Kid owns Leasco Data Processing, Randolph Computer, and a couple of other stocks that have either “Data Processing” or “Computer” in the title. “The need for computers is practically infinite,” says Billy the Kid.

“Look at the skepticism on the face of this dirty old man,” says the Great Winfield, pointing at Goodman. “Look at him, framing questions, I know what he’s going to ask. He’s going to ask what makes a company worth fifty times earnings?”

“Right,” admits Goodman. The Kids smile kindly, well aware that the older generation has trouble figuring out the New Math, the New Economics, and the New Market.

“You can’t make any money with questions like that,” the Great Winfield says. “They show you’re middle-aged, they show your generation. Show me a portfolio, I’ll tell you the generation.” He turns to his Kids, “A portfolio selling at hundred times earnings makes him go into a 1961 trauma. He is torn between memory and desire. Think back to the fires of youth, my boy.”

Goodman comes to a realization: memory can get in the way of such a jolly market. The strength of the Kids is that they are too young to remember anything bad, and they are making so much money they feel invincible. 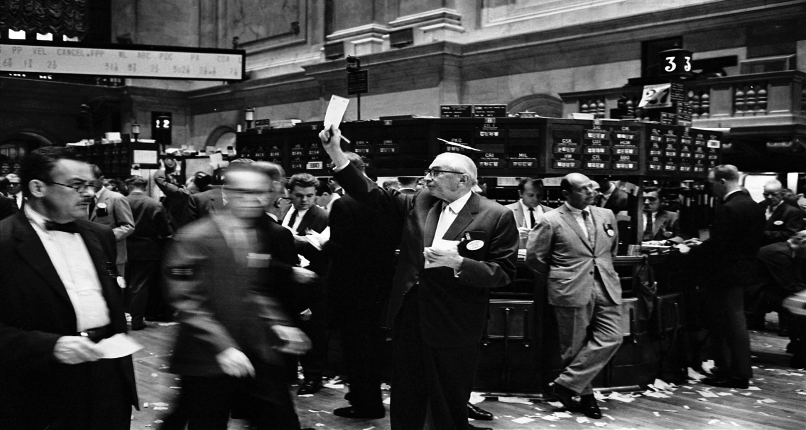 On a long enough timeline, history repeats. The echoes in today’s market behavior may differ but the psychology is converging. Once again, we have young bulls and aging bears.

The prices of tech stocks are soaring through the worst economic decline since the Great Depression. The contrast is striking. And, as ever, investors are asking why the stock market is so divorced from reality. The S&P 500 has erased 2020’s losses while the Nasdaq is up 17 percent year-to-date.

“Surreal doesn’t even begin to describe this moment,” Seth Klarman told his investors. “We were significant net sellers as prices rallied strongly.” According to Jeremy Grantham, stocks are “lost in one-sided optimism.” His confidence that this will end badly is increasing: “The history books are going to be very unkind to the bulls.”

While older investors are still haunted by their memories and waiting for the crash to reappear, there are new, younger players in this market. They are not nursing losses, nor are they suffering with skepticism from experience.

Clients of Charles Schwab traded more and opened a larger number of brokerage accounts in the second quarter than they did in the first three months of the year. Total active accounts increased to 14.1 million (up 18 percent year-over-year) with $4.1 trillion in client assets.

Schwab is signing up younger clients and in larger numbers, with those under 40 making up more than half of the additions since early 2019.

The brokerage added 661,000 new retail accounts and reported $1.5 trillion in total client assets. The second quarter included the top 15 trading volume days in the firm’s history with 10 of these days in June.

For the first half of 2020, net new retail assets and accounts at E*Trade more than doubled any full-year period in the firm’s history. The online broker added 656,000 retail accounts and $31.9 billion in net new client assets. “The second quarter was extraordinary as we achieved levels of customer engagement that are without precedent in our nearly 40-year history,” said CEO Mike Pizzi.

The sudden Covid-19 shock is getting more people looking to save and buy stocks.

Millennial-favored stock trading app Robinhood said daily trades were up 300 percent year-over-year in March with more than 10-times net deposits growth when compared to the monthly average in the last quarter of 2019. Robinhood has acquired 4 million new customers already this year, more than half of whom are first-time investors.

Robinhood’s median customer age is 30 and their subscribers more than doubled to 14 million over the past 18 months. The number of Robinhood user positions in S&P 500 stocks has leaped from 4 million at the start of 2020 to 12 million. Tech stocks account for a third of their holdings.

The Kids convene on social media sharing memes and jokes about stocks.

Last fall, in a bid to compete with Robinhood and other online upstarts, the discount brokers announced zero-commission for online trading of stocks and ETFs. This year, they are allowing investors to buy fractions of shares as well. For example, customers can invest as little as $5 in up to 10 stocks in a single transaction. Forty percent of trades on SoFi’s investment platform, used mostly by millennials, are through fractional shares.

The breaking down of barriers such as commissions and account minimums along with innovations like fractional share trading have the potential to attract even more people to investing. Meanwhile, millennials are poised to become the largest living generation.

“Genius is a rising market,” John Kenneth Galbraith once said. The kids did not lose money in the crash and their dopamine portfolio has made such substantial gains since that it makes them want more hits.

Apex Clearing’s analysis of about one million trading accounts of US-based investors with an average age of 31 revealed the top 10 most-popular stocks as of March 31. As one would expect, Apple, Amazon, Tesla, Microsoft, and Facebook emerged as the kid’s top picks—and represent 40 percent of their overall holdings.

“Millennials are significantly more invested in these pioneering companies than boomers or the silent generation,” noted Apex Clearing. As the Great Winfield said, “Show me a portfolio, I’ll tell you the generation.”

The millennials top 10 stock picks, which make up more than half of their holdings, are up 26 percent on average in the second quarter, dramatically outperforming the S&P 500 which is up 18 percent.

Shares of Carnival Cruise Line are down 70 percent, but Robinhood users were buying during the panic with an average purchase price of $13. The stock went up to $24 (it is now at $15). They have made money on the beaten-down airlines as well.

In a study titled, “Inexperienced Investors and Bubbles,” Harvard’s Robin Greenwood and Stanford’s Stefan Nagel found that increased stock market participation by individuals with little investment experience played a key role in the formation of the dot-com bubble as well.

Mutual funds run by younger managers were more heavily invested in tech stocks—relative to their style benchmarks—than those overseen by their older colleagues. Young managers were trend chasers, increasing their tech holdings during the run-up which was amplified by large inflows into their funds.

The common theme of these historical accounts is that a bubble only arises following the arrival of a new generation of investors more prone to optimism and primed to buy overpriced stocks. Investors who have experienced a crash are less willing to participate.

But when stock prices go high enough, even the most talented money managers struggle against the wisdom of crowds.

A very human aspect of manias, according to Elliot Wave theorist Robert Prechter, is that no prudent professional investor is perceived to add value. Indeed, the professionals with a knowledge of history and value—whom Barstool Sports’s founder Dave Portnoy mockingly calls “suits”—are judged as an impediment to success.

“Warren Buffett is washed up. I’m the new breed,” Portnoy recently told his legion of followers from his live day trading channel. “There are two rules to investing: stocks only go up, and if you have any problems, see rule No. 1. This is the easiest game I have ever played.”

The equity culture is ascendant. Again. Trying to resist the present moment is futile and will only cause more pain. As Alan Watts puts it, “The only way to make sense out of change is to plunge into it, move with it, and join the dance.”

We believe a dopamine portfolio made up of the top stocks owned by the Robinhooders can double in the next two years. The Kids are taking over.