The Fallacy of Long-Term Investors

“Some really transformative things are going on in the world of pension plans,” noted Michael Wissell, head of Total Portfolio at Healthcare of Ontario Pension Plan. “We’re in a situation where in the next couple of years, some of the largest pools of capital will be forced to go up the risk curve because they’ll have no other choice.”

Unfunded lliabilities are about to explode in as actuaries are going to cut the discount rate. Pension plans who do not take enough risk to meet their return requirements will most likely go bust. “All the levers of risk taking are going to get yanked by the collective pension funds of the world,” stated Wissell. “There might be a melt-up as they chase stocks.” 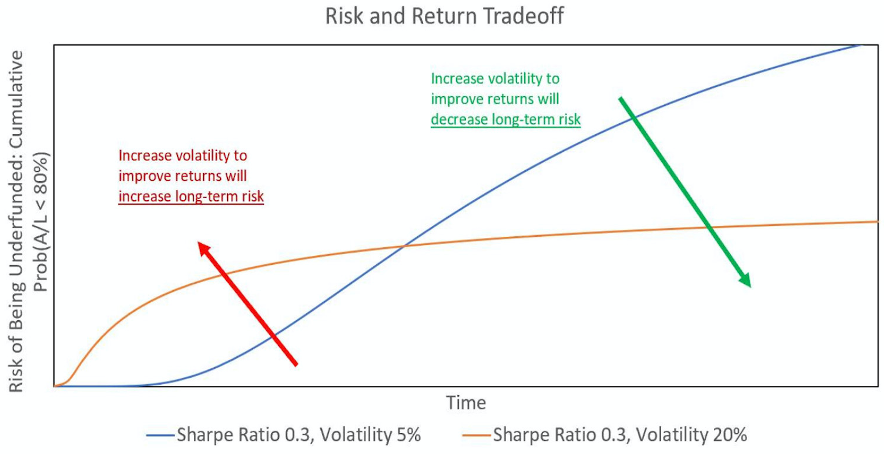 To illustrate the challenges pension plans are facing, his chart shows the path dependency risk facing each manager based on short-term versus long-term risk and return tradeoffs.

Imagine you have a fully funded pension plan investing in 2 alternative realities, with an overall average annual return of 6 percent. In reality 1, the pension plan had 20 good years but then 10 bad—the plan is still going to be funded and will be able to take care of its retiree beneficiaries. In reality 2, if this was flipped to 20 bad years and then 10 good—the plan will most certainly go bust, despite the exact same 30-year returns. A pension fund’s non-stop annual outflows, a geometric drain, is what makes the difference. Even fully funded pension plans can get in trouble, depending on the risks taken by managers.

“This geometric drain makes a fallacy of the belief that pension plans are long-term investors which can ignore what happens in the short-term,” said Wissell.

He’s not sure whether pension plans are going to suffer the bad outcome of the yellow curve by taking more risk, or they get lucky with a big risk asset boom that helps them dodge the bullet. However it plays out, he believes the ingredients for “creating an incredible soup for a risky asset bubble” exist. “Pension plan managers will go through all the stages of grief and the first stage is ‘denial’ before final ‘acceptance’ that they have to take more risks.”

A participant noted most institutions missed their chance to buy assets in March at lower prices, including bargains in investment grade debt. “There could be a catchup trade post the US election as some investors are waiting for political certainty before buying (assuming no contested election),” he said.

Could we be in for an inflationary boom, with pension funds chasing assets, with governments around the world searching for ways to put money in the hands of the people, and shall it be on the backs of a declining dollar with the end of American Exceptionalism?

One certainty is the unexpected will happen and the best is yet to come.