On March 31, as the stock market looked unlikely to ever recover from the crash and lawmakers toyed with the idea of closing the exchange, we wrote: “There will never be a requiem for the longest bull market on record, simply because the pessimism will birth a new one before we have the opportunity to mourn its passing.”

April turned out to be the best month for stocks since 1987. Investors fretted about the disconnect between soaring stocks and the still-suffering economy. Our view was that many major markets will fully retrace March losses. “No one believes that stocks may have just entered a new bull market,” we wrote on May 4.

It was all going to plan. As expected, (1) new data revealed that covid-19 is far less fatal than epidemiologists were assuming, (2) the market shrugged off the worst of the economic data despite a second wave of infections, and (3) Wall Street strategists upgraded their year-end targets to catch up with a rally that defied most of their predictions.

But we did something which we’ve come to regret. It is best told through a story from the classic book Reminiscences of a Stock Operator.

Upon recommending stocks to a market veteran, known as Old Turkey, a young investor warned him that the market was too high and he should sell and wait for the inevitable correction. Old Turkey demurred, “When you are as old as I am, you’ll know that to lose your position is something no one can afford. It’s a bull market, you know.”

Ours was a rookie mistake: we advised readers to turn cautious in June and prepare for a correction. But the S&P 500 kept rallying and went on to complete a V-shaped recovery in just 126 trading days. Contrast this to the four years it took for stocks to recover from the 2008 financial crisis. Some stocks have doubled since June.

With each passing week the feeling of regret impelled us to reconsider our decision. After reviewing all options, we returned to the conclusion that inaction is the proper course.

While “God’s chosen stocks”—as Mark Stoeckle of Adams Funds has coined the big tech companies—were soaring, the rest of the market seemed to be in a holding pattern, neither here nor there, more or less consolidating since June 8, when the percentage of stocks making 52-week highs peaked.

So much depends upon where you are standing. The view from the March lows is quite different to the view from June onwards. 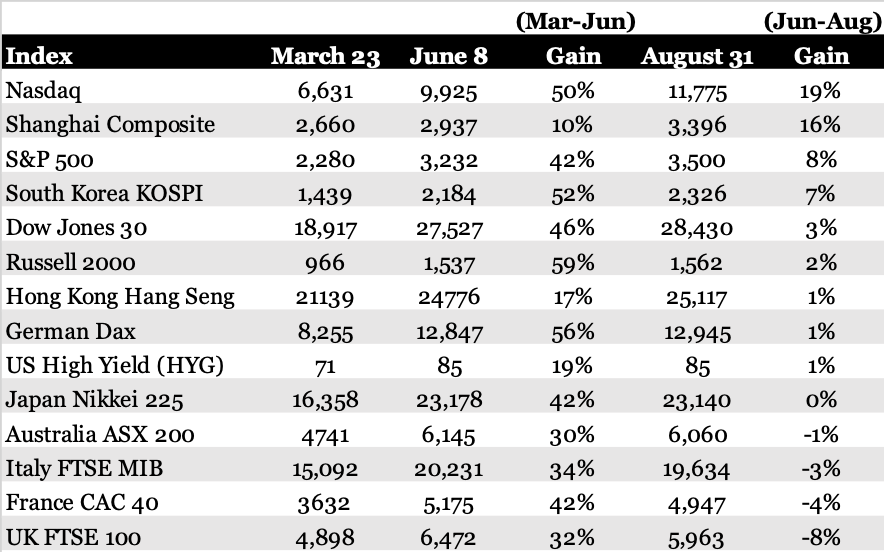 The question is whether global stocks catch up to Nasdaq’s rally or whether investors should be on guard for a more volatile and disruptive phase ahead.

Since we have outlined the medium-term bullish case in these pages, let us now turn to the reasons for our cautious tactical stance.

Investors are finally embracing the stock market rally after cutting their exposure to historically low levels in March, according to a survey by the National Association of Active Investment Managers. Even the most bearish respondents are 50 percent long equities. Short interest is at the lowest level since Goldman Sachs began tracking the data in 2004.

Sentiment is literally off the charts. The Citigroup Panic/Euphoria Model published weekly in Barron’s usually ranges from -0.5 to 0.5. The margins were increased to reflect the current euphoria which exceeded 1 on the index. The put/call ratio, a contrarian indicator for determining the mood from the options market, shows similar bullishness. Small traders are buying a record number of speculative call options.

The behavior of investors does not indicate any concern about the economy or complicated political dynamics. That puts us on high alert.

While US fiscal support has been the largest of any major economy, running to around 12.3 percent of GDP, real-time data shows that the recovery has stalled since midsummer. Consumer spending, business sentiment, small-business reopening plans, and even available jobs are flatlining.

“The psychology won’t just bounce back,” according to Charles Dumas, chief economist at TS Lombard. “People have had a real shock. Certain behavior patterns are going to change, if not forever at least for a long while.”

Many of the relief provisions from the first coronavirus stimulus package have dried up. The gulf in legislative proposals between the Democrats and Republicans means the next stimulus deal may not pass till late September, when a looming government shutdown may force a compromise. The two sides remain “miles apart,” House Speaker Nancy Pelosi said.

Even when an agreement is reached for another relief package, we suspect it will have a diminishing impact on risk appetite. The market doesn’t rally on old news. This would be the fifth bill since March and would only partly replace the former benefit. It certainly won’t deliver the “positive surprise” of the CARES Act.

The unemployment rate has steadily improved to 8.4 percent, down from its 14.7 percent peak in April, its highest level since the Great Depression. But the economy has yet to recover about 60 percent of the jobs lost since the start of the pandemic. “It’s quite possible that never again,” said Charlie Munger, “will we have a level of employment like we just lost.” It took six years for employment to reach its previous peak in the prior expansion.

Five months into the crisis, we’re still at a historically high level of initial jobless claims which ticked up last week to 1.1 million. The weekly peak during the 2008 Great Recession stood at 665,000. “It’s quite striking how widespread the vulnerability is,” notes Susan Lund, a partner at McKinsey & Company. “This is going to be a workforce disruption larger than any of us have lived through.”

Around 56 percent of the unemployed, or 9.2 million people, said they had been temporarily laid off and expected to return to their jobs in the coming months. However, the notion that most businesses will return to normal is fanciful. The prospects for rehiring have changed. Bankruptcy filings in the US are running at the fastest pace since 2013.

Companies receiving money under the CARES Act agreed to retain 90 percent of their labor force through September. Soon, we might see a second wave of layoffs as furloughed workers increasingly transition to permanent unemployment. As Mark Zandi, chief economist at Moody’s Analytics, puts it, “The real tsunami is coming.” The mood will turn sour if the unemployment rate starts rising again.

The Fed remains focused on downside risks, but further policy action is not imminent. Minutes from the recent FOMC meeting concluded that “yield caps and targets would likely provide only modest benefits” bearing in mind long-term interest rates are already low and forward guidance regarding the path of the federal funds rate is credible.

The corollary is we are past the peak in terms of fiscal and monetary impulse from the coronavirus stimulus efforts. The Fed’s balance sheet has steadied at $7 trillion, after a 71 percent expansion since the start of the year, and fiscal policy will become a negative factor for GDP growth as the effects of the CARES Act and other legislation wane.

In the second quarter of 2021, fiscal policy will decrease GDP growth by 6.1 percentage points below its potential, according to the Hutchins Center Fiscal Impact Measure. 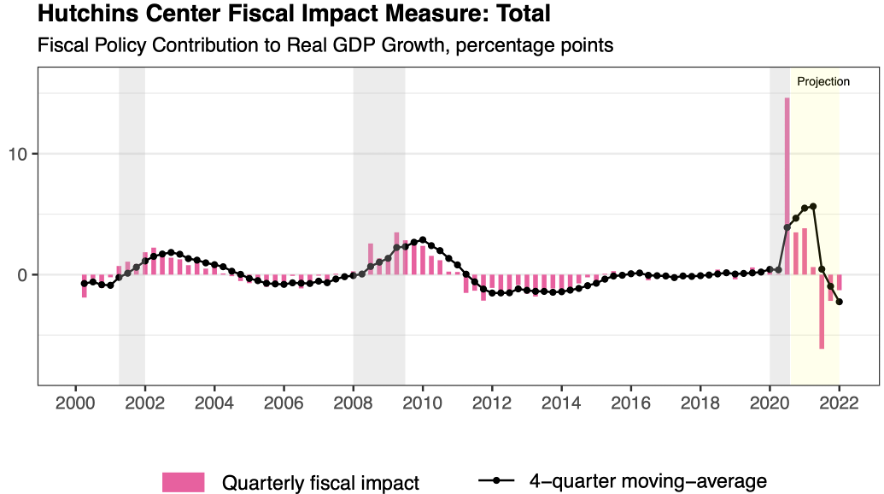 Of course, our analysis matters little unless it is confirmed by price action. “You’ve got to respect the technicals,” Mohamed El-Erian said in his role as chief economic adviser at Allianz. He does not recommend betting against the stock market because “technicals are really strong.”

Our evidence suggests otherwise. The S&P 500 index is up 60 percent from its nadir in March, but only 6 percent of stocks are making 52-week highs. Half the stocks are trading below their 200-day moving average. The S&P Equal Weight index is down 4 percent in 2020 and below the June 8 highs.

In fact, we are at a critical technical juncture across global markets.

The Nasdaq index has met the ideal 1.618 Fibonacci extension target following a breakout from the 2020 highs. China’s Shanghai Composite has retreated from the downtrend line connecting November 2015 and January 2018 highs. Japan’s Nikkei and Germany’s Dax have “filled” the breakaway “gaps” created during the stock market crash. France’s CAC 40 index has failed to break above the 200-day moving average.

If these key resistance levels are breached, we will be forced to reevaluate our view.

Valuation expansion explains the strong rebound in stocks from the March lows. The S&P 500 forward price-to-earnings (PE) multiple has jumped from 14 times to almost 23 times, or 64 percent, offsetting the steep decline in earnings.

Equity multiples overlap closely (inversely) with the historic downtrend in real yields. For multiple expansion to continue, nominal yields need to keep declining or inflation has to pick up more meaningfully. We don’t see either occurring over the near term.

The inflation-adjusted 10-year Treasury yield slid from minus 0.04 percent on March 23 to minus 1.08 on August 6. It is now minus 1.02 percent. If inflation surprises higher, nominal yields will move higher too, leaving real yields more or less unchanged. The key insight is that multiples have peaked for the time being.

Meanwhile, analysts predict a 22.9 percent decline in earnings in the third quarter (year-over-year) and a 12.8 percent decline in the fourth quarter. There is still time before profits recover and help contribute to the S&P 500’s return. In 2021, we expect nearly all of the price gain will come from earnings growth.

For now, it means the market may trade in an ominous churning pattern, with risks skewed to the downside. We’re left wondering whether investors will next regret buying too late?

After several high-profile unicorn flameouts, Masa Son has reportedly spent around $10 billion buying shares in Amazon, Microsoft, Google, Netflix, Tesla and other public tech companies to accelerate Softbank’s shift from telecom to investing. He also bought options tied to around $50 billion worth of individual tech stocks.

“Tactically, I’ve made regrets,” Son said. “But strategically, I am unchanged. Vision-wise? Unchanged.”