There are some truths that are so obvious that we never question them. The virtues of value investing is one of them. If you buy value stocks, your reward should be superior returns over the long run.

From 1927 through 2019, value stocks outperformed growth stocks 93 percent of the time over rolling 15-year time periods, according to the data compiled by Nobel laureate Eugene Fama and Dartmouth professor Kenneth French. The value premium—the excess return over growth stocks—was 3 percent per annum.

Value investing has held a structural advantage when considered over multiple market cycles. Its worst-ever performance, therefore, when compared to growth stocks last decade is vexing. The Russell 3000 Growth Index skyrocketed more than 300 percent in the last ten years while the Russell 3000 Value Index was only up 107 percent.

Should investors adjust to the changing landscape or side with a truism that has stood the test of time? The question took on new urgency this month after the scale of the rotation to cheap value stocks from trendy momentum names was the most violent on record.

This seems easy to resolve, as we believe the reason for value’s persistent outperformance is widely misunderstood.

Rather than cheap valuations, the biggest driver of value returns was sector composition. Value outperformed growth for most decades since the 1930’s because of overweighting in energy, materials, and finance, the dominant industries of the past century.

Visualizing how US equity sectors have changed

Oil boomed, automobiles and planes took off, and the materials sector answered tireless demand for road systems, electricity grids, factory upgrades and the non-stop construction of warehouses, offices, and homes.

From 1930 through 1980, energy and materials represented as much as 20 percent of the stock market—each. Oil tycoon J. Paul Getty became the world’s wealthiest man in the 1960s.

The financialization of the US economy from 1980 onwards boosted the financial sector, which had the largest weighting in the stock market by 2007. Warren Buffett was now the world’s richest man, earning a fortune investing in America’s biggest banks and insurance companies.

Over the past decade, these important sectors have faded from their former glory. Fallout from the global financial crisis and a commodity bear market put an end to value’s outperformance.

At the same time, technological advancements underpinned the rise of wholly new sectors such as information technology and healthcare, reflecting a new economic reality based on intangibles: IP, data and software.

According to professor Michael Mauboussin, earnings and book value no longer mean what they used to. Tangible assets, such as factories, were the foundation of business value and recorded as assets on the balance sheet when Benjamin Graham pioneered value investing in the 1930s. Yet intangible spending, such as research and development, has been driving innovation in recent decades and is treated as an expense on the income statement. That means a company that invests in intangible assets will have lower earnings and book value than one that invests an equivalent amount in tangible assets, even if their cash flows are identical. Earnings and book value are thus losing their ability to represent economic value.

The corollary is it doesn’t matter if value stocks are historically cheap versus growth stocks. As long as the global economy becomes more knowledge-based and increasingly reliant on new technologies, growth indices will outperform because of an overweight in the dominant industries of our time.

The Russell 3000 Growth Index has an 18 percent overweight in technology sector and a 21 percent underweight in financial services against its value counterpart. That’s what’s driving overall outperformance more than anything. 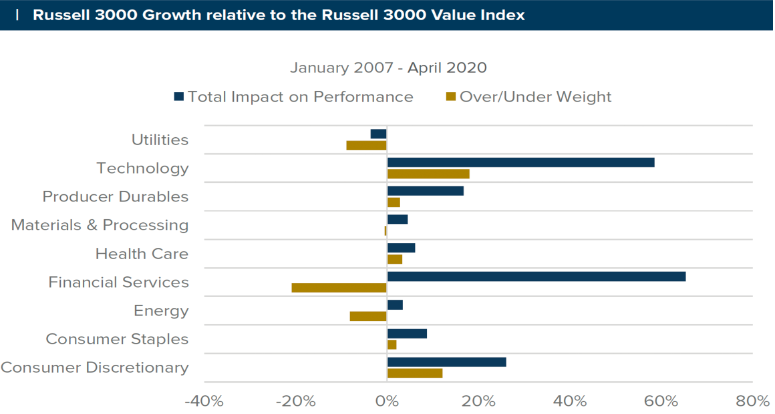 Growth stocks have outdone value by more than 30 percent this year; the technology sector accounts for nearly 40 percent of the S&P 500; and Jeff Bezos is now the wealthiest person alive. Yet, we believe the rotation from value to growth is the start of a secular trend that will persist over many decades.

The Second Industrial Revolution in the late nineteenth century was a great leap forward. At the peak of the railway bubble in 1880, the transport sector made up over 60 percent of stock market value. We can imagine the technology sector reaching those heights.

Investors are most astonished when someone suddenly discovers what everyone really ought to know. As the truth about value investing unravels, one could draw a few more conclusions.

(1) What matters over the long run are the sectors you invest in. Investing style is less important. It’s not that value investing is suddenly out of favor; rather, it’s that the sectors composing value indices are in secular decline.

(2) Valuations are futile for discerning the future. Metrics like Shiller CAPE and market-cap-to-GDP ratios are irrelevant. While there is an upper ceiling to valuations, no one knows what it is. Trust the big macro trends.

(3) The US equity market will maintain its global leadership given that it has the highest weighting in the technology sector. Investors should own Chinese tech stocks as well.

(4) The disconnect between markets and the economy will continue to grow. As Nobel laureate Michael Spence puts it, equity prices are measures of value creation for the owners of capital, which is not the same as value creation in the economy more broadly, where labor and tangible and intangible capital all play a role. Equity market indices today obscure even more than they otherwise would.

(5) Even if Big Tech is regulated and broken up, there will be more value creation from their sum of the parts. The tech sector more broadly will also grow as more private companies go public. There are over 500 unicorns globally, together worth $1.6 trillion. America has more than 230 unicorns valued at $700 billion.

The world is not going back to the way it was. The future is already here. Time to renovate demonstrably false old truths.