One of the oldest Chinese mythologies recalls the Great Flood. The Yellow River broke its banks some four thousand years ago, wreaking havoc. Historical texts describe “endless” water washing over hilltops and “pouring forth destruction.” Survivors left their homes to seek shelter in the high mountains. The deluge persisted for decades.

A legendary hero, Yu the Great, finally tamed the flood by carving water channels through mountains and dredging rivers to drain it away. This feat took thirteen years, and it earned him the “heavenly mandate” to establish the Xia dynasty, marking the beginning of Chinese civilization.

The lesson was lost neither on China’s earliest cultural heroes nor on its modern leaders, from Republic of China founder Sun Yat-sen to Mao Zedong himself: he who controls the water controls the people. Is there any other nation whose foundational myth celebrates a hydraulic engineer as the hero?

In The Water Kingdom, science writer Philip Ball argues that China’s two greatest waterways, the Yellow River, which flows across the north China plain, and the Yangtze River, which charges through the heart of the country, are both “symbols of the nation” and, for millennia, have been the “keys to its fate.”

The Yellow River starts as a clear sparkling stream in the high mountains of Qinghai, adjoining Tibet. It meanders from east to west for more than a thousand miles, and then turns north in a great loop up into the deserts of Inner Mongolia. Turning south, it passes the Loess Plateau. Here the silting begins, as the loess, the wind-blown sediment composed of clay, sand and silt, crumbles after each torrential rain and falls into the Yellow River, coloring its water.

As the world’s most heavily silted river, the caprice of the Yellow River as it shifts and floods—over 1,500 times in the last 4,000 years—has earned it the sobriquet “China’s Sorrow.” A flood of the river in 1887 killed up to 2.5 million people and left the Qing dynasty moribund.

In 1931, heavy snowmelt, torrential rains and seven different cyclonic storms combined to produce the most devastating flood in Chinese history. In July alone, central China was swamped by a year-and-a-half’s worth of rain. The Yellow and Yangtze rivers burst through their dikes and flooded an area larger than the of England. It was the worst natural disaster of the twentieth century, killing 4 million and leaving 80 million people homeless.

The Yellow River has not burst its banks since 1949, when the Chinese Communist Party emerged victorious from China’s brief civil war. “There is a new war,” as Mao put it, “we must open fire on nature.” His plans for the Great Leap Forward included the construction of dams to control China’s unruly waterways. His swims in the Yangtze signified mastery over the waters. (Deng Xiaoping would also jump into the Yangtze when he was in his eighties to prove his credentials.) 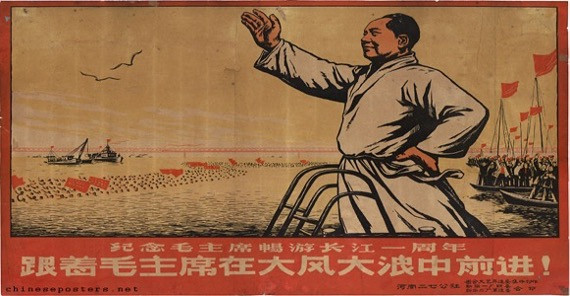 The first large dam project on the Yellow River was built in 1960 with Soviet help. “We knew there was a silt problem,” dam engineer Song Lianzeng later admitted. But the Russians assured the Chinese that they had designed the dam in such a way that it would be good for a least 50 years. “We believed them.”

The dam was embellished with the slogan, “When the Yellow River is at peace, the nation is at peace.” A giant statue of Yu the Great stands guard on the cliff overlooking the dam at Sanmenxia. There exists in China, Ball writes, “an intimate connection between hydraulic engineering, governance, moral rectitude, and metaphysical speculation.”

China has 98,000 dams, most of them small-scale and built hastily in the sixties to impress party officials. Thousands have since collapsed. In 1975, the Banqiao dam in Henan broke, releasing a 40-mile-an-hour flood that devastated everything in its path. It was the largest single dam disaster in history: nearly a quarter of a million people died.

The idea of building a dam on the flood-prone Yangtze River was conceived by Sun Yat-sen in 1919. Several attempts at construction throughout the twentieth century failed for political or economic reasons, despite a series of catastrophic floodings. It was finally completed in 2006, the largest project in China’s history since the Great Wall. 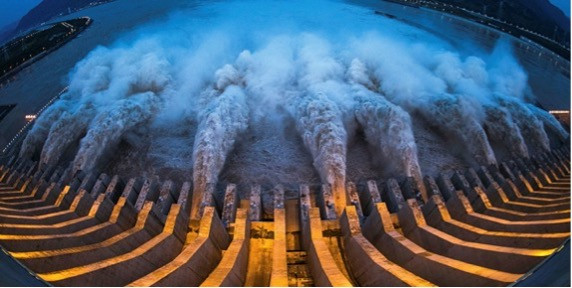 The BBC described the Three Gorges Dam in Hubei province as “a place of pilgrimage and a powerful symbol of China’s rising economic might.” But the megaproject was not without controversy. Scientific American noted that building “a massive hydropower dam in an area that is heavily populated, home to threatened animal and plant species, and crossed by geologic fault lines is a recipe for disaster.”

Warnings have been coming from multiple channels, and in a 2001 study two professors at China University of Geosciences in Wuhan, Hongfu Yin and Changan Li, put forth three salient areas of concern: the levees that have helped in the short term impede water flow can exacerbate floods by hampering discharge capacity and pushing river water to new heights; developers have chipped away at lakes and rivers to make way for infrastructure and buildings, but as those bodies of water shrink so does the ability to absorb flood waters; finally, severe soil erosion goes hand in hand with increasingly dangerous flooding: in the middle Yangtze valley, “in the past 30 years, the forest cover has been reduced to half.”

Twenty years later, the floods are more frequent, the water levels are higher, and the damages are ever more serious.

Heavy rainfall in Hubei, Hunan, Anhui and Jiangxi swelled the Yangtze in the summer of 2020, triggering the worst flooding in decades and raising concerns about the Three Gorges Dam, which recorded the largest inflow of water in its history. The water level in the reservoir reached 165.5 meters. The dam, which is 185 meters tall, is designed to withstand a water level of 175 meters maximum.

Flooding is typical in Southern, Central and Eastern China during the meiyu, or “plum rain”—the East Asian wet season that runs from June to August, but these floods were historic. The Yangtze River basin’s rainfall was the highest since 1961. Water levels reached record highs in 53 rivers and breached the flood control line in 433 others.

Almost 55 million people were affected across 27 provinces—3.8 million people had evacuated and 200 people were dead or missing. “The Chinese nation has fought natural disasters for thousands of years,” Xi Jingping declared to soldiers and rescue workers. “We will continue to fight.” 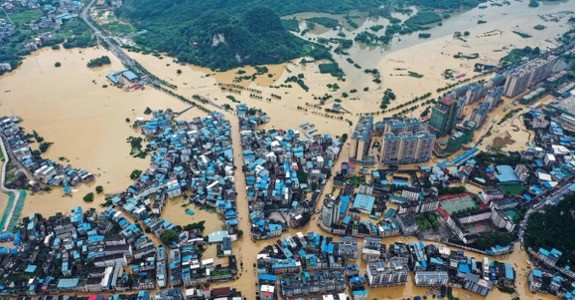 The Yangtze River basin provides water, transport, and food for almost one-third of China’s 1.4 billion people and supplies more than 40 percent of the country’s GDP. The lower Yangtze is central to global manufacturing for companies like Apple, Walmart, and Nike.

With everyone focused on the chip shortage and the geopolitical positioning of Taiwan, we believe the Yangtze River basin is economically more important and presents a bigger threat. The Yangtze is the heart of the global supply chain. In the last two thousand years the river has flooded more than a thousand times.

The Three Gorges Dam is upstream of major manufacturing hubs Wuhan and Jiujiang, along with Shanghai a thousand miles farther down at the coast. The dam’s implosion would engulf the nearby city of Yichang, home to some four million people, in less than an hour. The entire economic belt would be flooded within a day, bringing to a halt some 20 percent of the world’s manufacturing, causing massive shortages in many categories of goods.

Even if the Three Gorges Dam is built to last, the real risk is that intense rainfall pushes the reservoir’s water level to 175 meters. The most urgent task would be to discharge a massive amount of water to reduce pressure, flooding downstream cities and their ill-equipped dams and dikes.

(The worst situation would be a major earthquake induced by pressure from the rising water. While the Three Gorges Dam is built to withstand a magnitude 7.0 earthquake, the reservoir sits on two major faults: the Jiuwanxi and the Zigui–Badong.)

Can aging dams maintain historical levels of flood protection in the face of extreme weather changes? A new report from the Intergovernmental Panel on Climate Change says that rainfall and floods seen as “once in a decade” events are going to become increasingly more frequent. The global hydrological cycle is speeding up, and precipitation is becoming extreme. China is the country most vulnerable to flooding as global temperatures rise.

Last summer’s record rainfall in Henan, a logistics hub with a population of about 100 million, caused floods that killed more than 300 people and suspended production at factories. In Zhengzhou, the provincial capital and a major iPhone production center, a year’s worth of rain dropped in just three days. The Yihetan dam in Henan was breached and two other dams in the Inner Mongolia region collapsed after overflowing.

Despite all the headline attention on China’s demographics, falling growth rate, its huge debt problem, and the tech crackdown, the environment may be an even more serious challenge for Beijing.

This, then, is why China is committed to achieve peak emissions by 2030 and carbon neutrality by 2060. The more extreme frequent flooding serves as a reminder to Xi that the country’s perilous waters have made or broken past leaders. 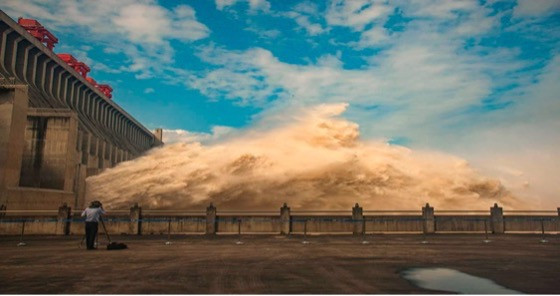 Water seems so soft, weak, yielding
Yet easily overcomes the hard and strong.
It has no equal.

Every great leader is tested. Now its Xi’s turn.