The S&P 500 declined 23 percent between January 3 and June 16. It is up 14 percent since then. The tech-heavy Nasdaq, which dropped 32 percent, has since gained 20 percent. And yet worried fund managers are holding the highest level of cash since after the September 11 attacks in 2001, according to a Bank of America survey, and they are even less willing to take risks than after Lehman Brothers collapsed in 2008.

The mid-June low is notable. On June 14, the US Treasury 10-year bond yield reached a high of 3.49 percent. Two days later, the 30-year mortgage rate peaked at 6.7 percent. And the average price across the country of a gallon of gas surpassed $5 for the first time. The annual headline inflation rate increased from 8.3 percent in April to 8.6 percent in May and 9.1 percent in June, its highest level since November 1981. July’s 8.5 percent rate represents a downshift.

On June 15, the Fed raised the federal funds rate by three-quarters of a percentage point in its most aggressive hike since 1994. Futures markets showed investors expecting the fed funds rate to hit 3.6 percent by the end of the year, above the Fed’s forecast of 3.4 percent. This past December Fed committee members predicted a 0.9 percent end for 2022.

In the same week came a record high in the number of economics stories using the word “recession” in either the headline or the first paragraph: 21,576. Meanwhile, the small business (NFIB) outlook hit an all-time low. And the AAII bull–bear sentiment ratio came in lower than at the height of the pandemic. Asking if we were “Feeling unwell?”, Bloomberg BusinessWeek put a vomit bag on the cover of its magazine imprinted with the words “For market upheaval, economic turbulence and other discomforts.” 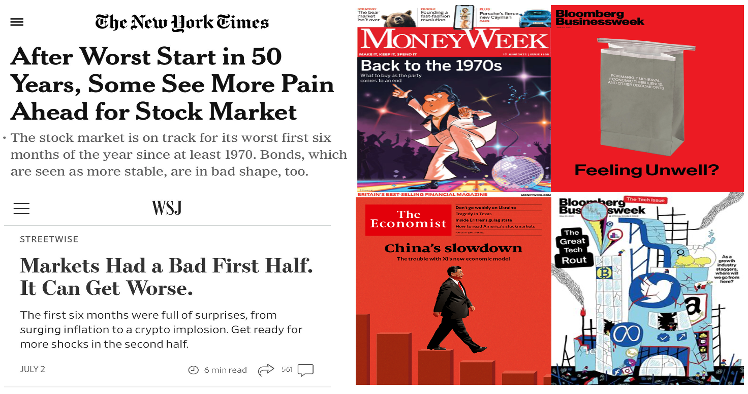 The most speculative pockets of the market, including Cathie Wood’s Ark Innovation Fund (ARKK) and biotech, bottomed on May 12. That was the first sign. Then the Nasdaq started outperforming from May 23, despite a 75-basis-point jump in 10-year yields. Additionally, just 10 percent of the companies in the S&P 500 were trading above their 200-day moving average on June 13. A year ago, the proportion was more than 90 percent.

Likewise, we observed encouraging developments in China. On May 26, the State Council convened an unprecedented videoconference with more than one hundred thousand officials across the country. Premier Li expressed concern about the possibility of the Chinese economy “slipping out of the reasonable range.”