What if we are in a sideways market?

As investors look ahead, not only to a new year but a new decade, we find it useful to look backwards and examine a question few people are asking.

Investors have a strong desire to identify trends, and it often leads them to detect a directionality that doesn’t exist. Many see the nearly 24 percent gain in the MSCI All-Country World Index last year—the strongest return since 2009—and determine the market is in a bullish uptrend. But what if we are actually in a sideways market—and have been since January 2018? The MSCI All-Country World Index is only up 5 percent since then.

The basics of a sideways market is that the market oscillates within a wide trading range over any period. The price high can occur at the start or come later, but it generally does not exceed more than 15 percent of the previous high point. While the direction of the market is sideways and the return over the entire time span is essentially flat, the variation within sectors and stocks is dramatic and leads to plenty of opportunities to earn high excess returns.

A performance review of global markets over the past two years suggests that we may, in fact, be in another sideways market. 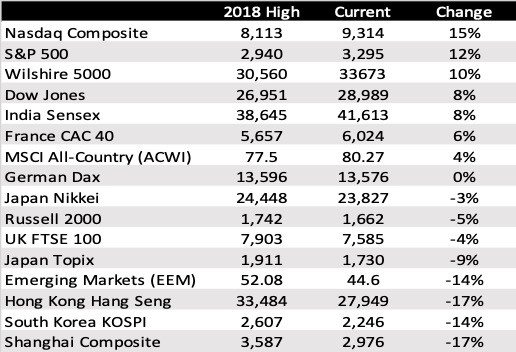 The S&P 500 peaked in September 2018 at 2,940 and dropped 20 percent to 2,346. From the December 2018 bottom, the index has rallied 42 percent to 3,329 today, which exceeds the prior high by 13 percent. If we are correct in our thinking, we are close to the upper limit of this sideways market. Rather than a melt-up, what comes next is an ominous churning pattern followed by a truly cleansing downside correction. The S&P 500 could revisit the lows from December 2018—and the index may not surpass its 2020 highs for a few more years, producing a flat return over a multi-year period.

We now delve into our contentious view by closely studying the interaction between politics, policy, economy, and markets.

All of the positive political catalysts are behind us: a US-China trade deal (phase one), the UK election (Corbyn defeat) and clarity on UK’s exit from the European Union (January 31), and less political uncertainty in the run-up to the US presidential election, with Joe Biden remaining strong in the polls while Senator Elizabeth Warren has lost ground.

Warren’s standing peaked in October at 53.4, according to RealClear Politics, and has trailed off since then to just 13.1. The S&P 500 rose 11 percent during this time. The market is confident either Trump or a centrist Democrat will win the 2020 election, pricing out the progressive left’s ascendancy. While that may in fact eventually be the case, we are not quite willing to bet on that outcome yet. A lot can happen in the ten months before election day.

We struggle to see Biden, positioned as the safe and more familiar choice, winning the Democratic nomination. He may have experience, but he lacks enthusiasm to inspire young voters and may not be a reliable electoral bet. Polls of Iowa, New Hampshire, and the nation at large consistently find him polling below 20 percent among voters under 50. The youth turnout will be the difference maker in 2020.

Exploding economic inequality, stagnant living standards, and growing concern about monopolies and the environment means that the “progressive backlash” will be a major theme this decade. We would not be surprised if the progressive left makes a comeback and spooks markets. The Warren-Sanders feud at the Iowa debate could spark reconciliation and mark a turning point. Several shaken progressive activist groups have urged the two candidates to “find ways to cooperate,” and prevent “an establishment or corporate Democrat” from becoming the party’s nominee.

The 2020 Iowa caucuses will be held on February 3, but we may have to wait till Super Tuesday on March 6, when a large number of Democratic primaries are held, for more clarity on the presidential candidate. Looking at current odds, we think political risk is skewed to the upside.

The “phase one” trade deal still leaves the US imposing 25 percent tariffs on $250 billion of Chinese imports and a 7.5 percent levy on another $120 billion. The Fed estimates 100% of tariff costs have been borne by American companies and consumers so this is still going to hurt. Moreover, there is no sign of any kind of currency agreement between Beijing and Washington and tensions can flare up again as China’s human rights issues come into focus as the US election draws near. This is a long battle.

The global monetary tightening cycle ended in early 2019. In the months that followed, more than 30 central banks lowered interest rates in response to softening domestic prospects, persistently low inflation, and weakening business confidence. The last time so many of the world’s major economies cut rates or considered stimulus in unison was during the financial crisis. The rate cutting frenzy, and some additional easing by other means, resulted in a marked easing of financial conditions around the world which buoyed asset prices.

After a surprisingly active 2019, we expect most central banks to take a break for now. The Fed has paused after a trio of interest rate cuts last year and said it hoped to end its balance-sheet-expanding Treasury-bill buying by around June. If the Fed halts or slows this initial pace of $60 billion per month it will surprise markets, which is confusing Fed’s actions to keep short-term rates under control with another round of sustained quantitative easing. Fed repo operations have brought calm to money markets, and short-term rates haven’t shown big swings.

Any meaningful policy support globally will have to come from fiscal policy, and we do not see this occurring in 2020. Fiscal impulse is mildly supportive in China, the euro area, and the UK; contractionary in Australia, and neutral in the US and Japan. Investors have grown more confident on the possibility of fiscal expansion to support social and environmental objectives, but significant fiscal stimulus remains unlikely unless there is a more severe downturn in our view.

Despite a slowing economy, there is no end in sight for China’s financial de-risking campaign; European fiscal rules require a major overhaul which will take more time and political effort; and President Trump’s impeachment trial makes it less likely for any legislation to pass through in the US ahead of the election. This clouds what the market can expect from government policy in 2020.

As unconventional monetary policy is exhausted, fiscal policy is sure to become more proactive in the future, but the impact on the economy from any changes will not be seen this year due to lags in implementation. Taken together, the policy backdrop is not as supportive as is widely perceived. We expect financial conditions to trough around current levels.

The 2010s were the first decade in the US without a recession since record-keeping began in the 1850s. The smoothing of the business cycle is somewhat of a marvel. However, we are reaching the natural limits of this economic expansion. The gradual decline in the unemployment rate between 2009 and 2019 to a half-century low of 3.5 percent is grinding to a halt.

According to Deloitte’s quarterly survey of nearly 150 executives at top North American companies, 97% of CFOs believe that a downturn—either a slowdown or a recession—has already begun or will occur by the end of 2020. The Conference Board measure of CEO confidence rebounded in the final quarter of 2019, but CEOs still remain “apprehensive” about global growth prospects in 2020. This influences capital spending and hiring decisions.

The CNBC Global CFO Council survey found that 60% of CFOs expect their company’s head count to decrease over the next 12 months. The job openings and labor turnover survey, or JOLTs, showed job postings peaked in late 2018 and the number of job openings is 9 percent lower than it was a year earlier. Temporary help services sector jobs for the four weeks ending January 5 have declined 6 percent from the same period a year ago. It is worth remembering that temporary employment rolled over twelve months ahead of the last two recessions.

Manufacturing activity in the US has contracted to its lowest level in more than a decade. While there are signs several industry sectors will improve as a result of the trade agreement between the US and China, we do not expect a strong sustained recovery. The PMI could get back to the 52-53 range from 47.3 in December, but that is all. The uncertainty related to the presidential election and the constrains imposed by the policy backdrop will make for a challenging economic environment.

There has been little wage acceleration in this cycle, but margins invariably decline after a two-year lag once average hourly earnings rise. This is now happening as the positive impact form the tax reform has passed. Factset data shows S&P 500 net margin slipped to 10.7 percent in the fourth quarter. The dollar has remained strong so there is no positive pass through from currency translation effects either.

How sustainable is the ongoing multiple expansion in this environment?

According to Andrew Lapthorne from Societe Generale, the forward price-to-earnings ratios for US growth stocks have reached levels only seen in eight months over a span of three decades of data. The price-to-sales ratio of the S&P500 is at an all-time high. Historically, forward multiples contract or remain flat following years of big multiple expansion.

The average S&P 500 stock began 2020 just 5.5 percent below its consensus price target, according to Bespoke Group. Equity Analysts are now upgrading “Price Targets” at a record pace. Morgan Stanley’s Mike Wilson, the most bearish Wall Street strategist with a 3,000 target, now sees potential for the S&P 500 to rise as high as 3,500 in the first half of 2020. As we often like to say, nothing changes sentiment like price.

David Tepper recently told CNBC he loves “riding a horse that’s running.” Stan Druckenmiller confirmed that he, too, is still “riding the horse.” While Ray Dalio said “cash is trash,” again (previously, January 2018). Referring to the melt-up in stocks, Paul Tudor Jones said that he thinks “the train has got a long, long way to go.”

However, market breadth is deteriorating, with the percent of stocks making new highs actually falling. This is occurring when, based on aggregated equity futures positioning as a percent of Open Interest, asset managers and levered funds have never been longer! Could we be seeing a buying climax?

What worries us is that the JPMorgan Global FX Volatility Index, which tracks the options market to measure expected price swings, is trading lower than at any point since it was created almost three decades ago. There have only been three previous troughs in the index and each time the US dollar exploded 10% over the next six months triggering a global risk-off.

Despite all the fundamental reasons to be bearish, the dollar has remained resilient even in the face of Fed rate cuts, weaker US growth, and increased domestic political risk.

Once J.P. Morgan was asked what the stock market would do next. He simply said, “It will fluctuate.” Get used to it. Everything we look at today is trading where it should trade in 2 or 3 years from now.