The End of American Exceptionalism

The Speaker summarized his views on the US dollar in four charts. The top left chart shows the increase in dollar liquidity which should put downward pressure on the dollar. As it is, foreign holdings of US assets are the most extreme in recent memory, as shown in the top right chart. The bottom left chart shows the explosion of the US twin deficit also poses downside risk to the dollar, and the bottom right chart supports this view as growth forecast revisions have been most negative in the US. 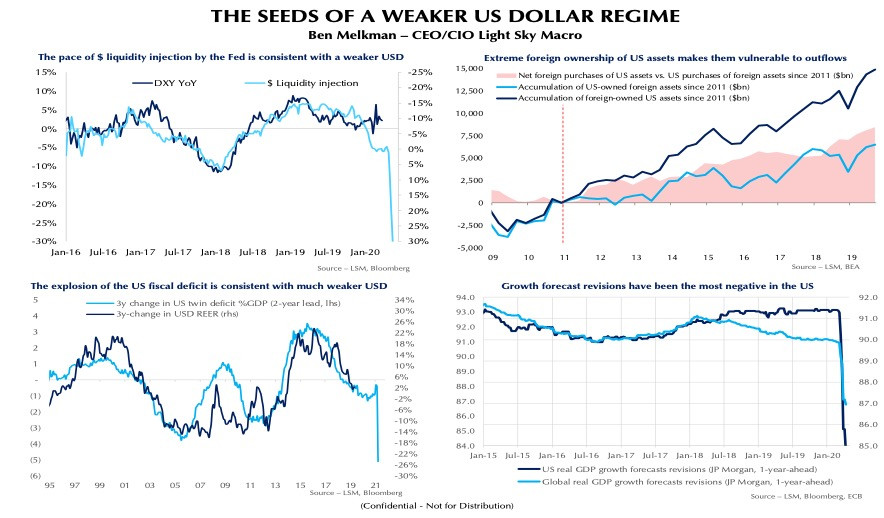 The Speaker added that we have reached the climax of the decade-long period of American Exceptionalism: the shale boom has turned to bust, Silicon Valley’s excesses are unwinding, and the Fed has slashed rates to zero offering little carry. He believes the US dollar peaked mid-March.

The Speaker was alone in his view. While the long-term outlook for the dollar looks challenging, the consensus was that the dollar bull market is not over.

The participants argued that the Fed had to do more than other central banks because the US dollar is still the reserve currency of the world. The provision of dollar liquidity through swap line arrangements was needed to address the dollar shortage.

And while the US fiscal deficit is blowing out, the same applies to every other country. The pandemic is global in scope and revealing how much the world has not changed over the past 10 years. The dollar is still the go-to currency in times of crisis.

All the prerequisites for a structurally weaker dollar were already in place at the start of 2020, said a participant, but the pandemic seems to have put that on hold. Everyone still liked gold.