There is a saying of the Prophet which goes like this.

The heavens and the oceans and the earth complained to their Creator of mankind’s wickedness and corruption. “Let me fall upon them and crush them,” pleaded the heavens. “Let me engulf them and drown them,” cried the oceans. And the earth begged for permission to swallow them.

But the Lord of the Worlds replied, “If you had created them, you would have mercy on them.”

The Almighty has nuanced ways of educating us. Things don’t just happen in this world without purpose, in some kind of crazy, accidental way. There is a cycle of cause and effect.

Everything happens according to certain laws, such as the law of karma, which teaches us that the actions and intentions we put out into the world come back to us. In the words of Sri Guru Granth Sahib, “As she has planted, so does she harvest; such is the field of karma.”

Our mistreatment of the environment and animals paved the way for Covid-19.

The destruction of wild habitat for farming, logging and development has resulted in what many scientists consider the Sixth Great Extinction. About half the Earth’s animals are thought to have been lost in the last 50 years. Species across land, rivers and seas have been decimated. It’s hard to grasp the extent of the damage.

As a result of the transformation of the planet by human activity, animals are living in closer spaces, and viruses are transferring from one animal to another. Then in the trafficking, selling, and eating of wild animals, a virus gets the chance to jump into people. That’s what happened with Covid-19.

Zoonotic diseases—those transmitted from animals to humans—cause 2.5 billion cases of human illness and 2.7 million deaths each year, according to the National Institute of Health. The spread of diseases such as HIV, Ebola, Sars, Mers and Zika are also believed to have originated in animals.

“The balance of nature has been disturbed,” says Dr. Jane Goodall, as the suffering of humans and other animals has increased. She has called for an end to this “destructive and greedy period of human history.”

We are in a somewhat unprecedented moment of realizing just how vulnerable each one of us is to problems that may start far away from us, in other species, in other parts of the world. Covid-19 is a reason to reckon with the enormous impact that something damaging the natural world can have on us as individuals.

A warming world has made many extreme weather events more frequent, intense and widespread, from heatwaves across Europe to floods in South America, cyclones in Asia, and the eruption of wildfires from the Amazon region to Australia.

Despite a series of pledges from businesses and world leaders to tackle climate change, global carbon emissions continued to rise.

Each decade from the 1980s has been successively warmer than all the decades that came before. Nineteen of the 20 warmest years have occurred since 2001. By NASA’s calculations, 2019 was the second warmest year on record, behind only 2016. This year, the Earth had its hottest January in recorded history.

And then came Covid-19, which has triggered the largest ever annual fall in carbon dioxide (CO2) emissions, more than during any previous economic crisis or period of war.

In China, carbon emissions were down 18 percent between early February and mid-March due to falls in coal consumption and industrial output, according to calculations published by climate science and policy website CarbonBrief. That slowdown caused the world’s largest emitter to avoid some 250 million metric tons of carbon pollution—more than half the annual carbon emissions of the United Kingdom.

Marshall Burke, an assistant professor of earth systems at Stanford, has estimated that the reduction in pollution from the shutdown of factories in Wuhan has saved between fifty and seventy thousand lives in China—20 times more people than the virus killed in Hubei Province.

In Europe, the drop-off in power consumption with sharp declines in industrial activity and the carbon-intensive airline industry could cause emissions to fall by nearly 400 million metric tons this year.

In America, transportation is the single biggest source of greenhouse gas emissions. Because passenger vehicles account for about 60 percent of that, the short-term effect from the lockdowns on the nation’s carbon footprint could also be significant.

Global CO2 emissions are expected to fall 8 percent to 30.6 Gt in 2020, the lowest level since 2010. The Center for International Climate Research predicts that “with good planning, this could be the year that global emissions peak.” 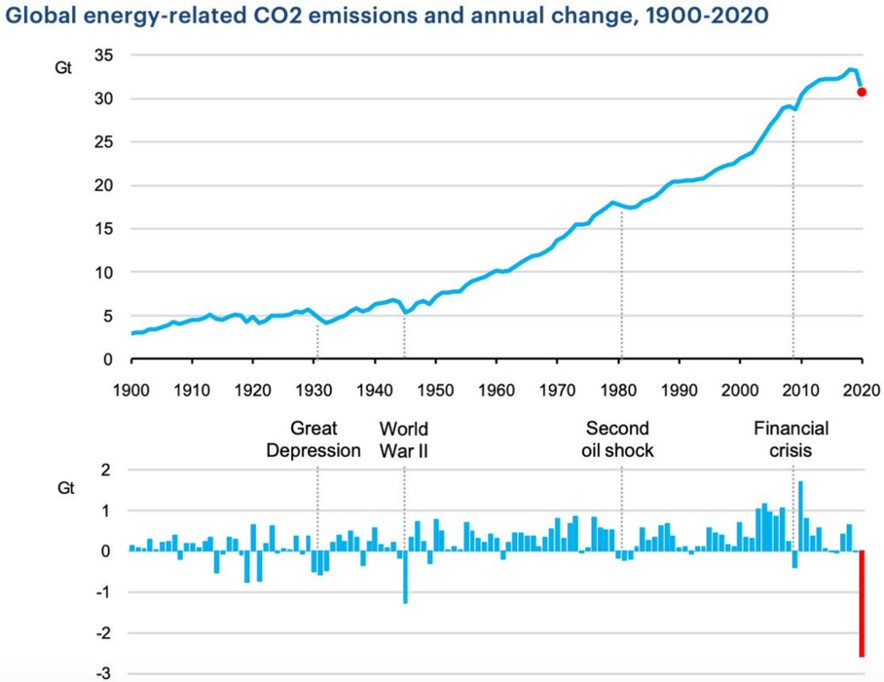 The pandemic has effectively frozen travel. Cars and airplanes are sitting immobile. The TSA screened more than 2 million people per day in April of last year. Now, it screens about 100,000 daily. Travel spending—including on airlines, hotels, and cruises—is down more than 100 percent, if you include refunds.

Skift founder, Rafat Ali, expects air travel won’t return to early 2020 levels for five years, taking into account that the airline industry took three years to recover post-9/11, and two years to return to pre-2008 revenues after the recession. Societal shifts that have occurred as a result of lockdowns—like widespread telecommuting and holding conferences virtually—could lead to much less travel and shrink aviation’s carbon footprint.

“Flying is the quickest and cheapest way to warm the planet,” said Andrew Murphy of Transport & Environment, a think tank in Brussels. Greenhouse gas emissions from commercial air travel was growing at a faster clip than predicted in previous projections before the virus hit the industry. Airline stocks are down 50 percent year-to-date.

Global oil demand has plunged, and the front-month price of oil futures turned negative for the first time in history. On April 20, the May NYMEX crude oil contract fell to minus $40.32 a barrel.

For decades, America’s oil majors have spent billions to control the climate change conversation and counter proposals to rapidly cut pollution from the power plants and cars that run on the industry’s petroleum and natural gas. With Covid-19, the oil industry shakeout is just beginning with more production cuts and bankruptcies ahead.

Goldman Sachs predicts nearly one-third of the oil and oil services companies in the country will vanish, acquired by rivals or driven out of business. Energy stocks are down 40 percent year-to-date.

History is filled with examples of tribes or peoples who were given sufficient rope to hang themselves and they fashioned a noose for their own necks. Atonement refers to the righting of a wrong, the needed reconciliation between the sinful mankind and the Creator and Ruler of the Universe.

We believe the pandemic will accelerate the world’s transition to sustainable, decarbonized economies. The market is discerning the future. Tesla’s shares are up 67 percent this year. Meanwhile, Ford and GM’s shares are down 47 percent and 43 percent, respectively. Shares of Beyond Meat, producer of plant-based meat substitutes, are up 21 percent.

There is growing investor interest in environmental, social and governance focused (ESG) investing and we believe that investor interest is not going to revert. Two-thirds of ESG funds have outperformed their traditional counterparts since the beginning of the year. 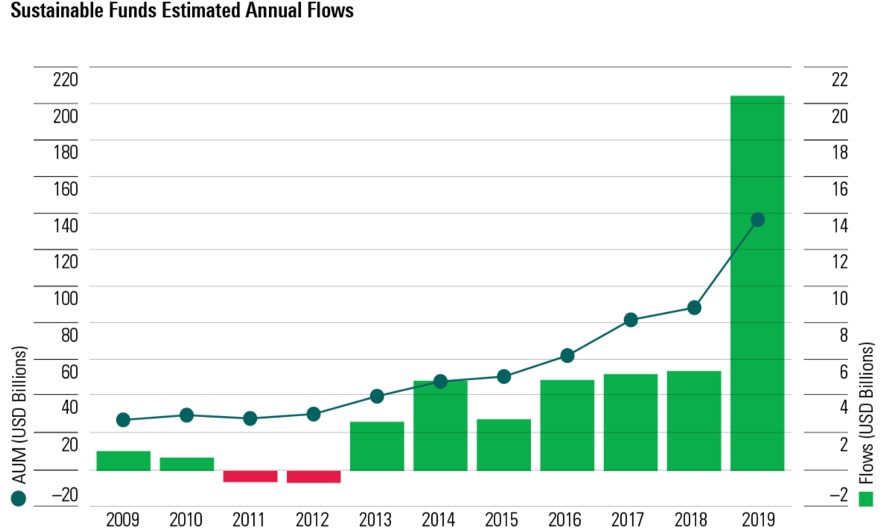