There is room for calm amid the uncertainty about labor shortages and wage inflation, and to understand why we can cast our minds back to the winter before the Great War.

On January 5, 1914, Henry Ford made an announcement that shocked the country. At a time when every other manufacturer was trying to cut costs, Ford doubled the pay of his workers at Ford Motor Company and reduced the workday from nine hours to eight hours.

The Wall Street Journal’s editorial board was livid: “To double the minimum wage ... is to apply Biblical or spiritual principles where they do not belong.” The Journal warned that Ford had committed “blunders, if not crimes” that may return to plague the industry and society.

While boosts to productivity cut the time it took to produce a Model T car from 12 hours to 93 minutes, it took a toll on worker satisfaction as skilled craftwork was reduced to repetitive labor. The mundane assembly process bored those who had taken joy in their work. Lateness and absenteeism became a habit for some. Many simply quit.

Ford sought a way to reduce workforce turnover, which plagued the company’s fortunes. His revolutionary announcement amounted to the first time in modern history that employees were viewed as an investment rather than an expense to be minimized.

Contrary to conventional wisdom, profits doubled two years later. It was one of the greatest business decisions of all time. As Ford put it, the “five-dollar-day was one of the finest cost-cutting moves we ever made.” 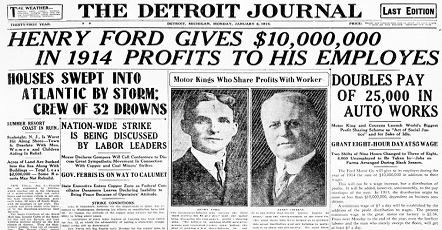 Many large corporations raised pay in the 1920s, launched pensions, and started offering healthcare benefits, acting out of a mix of paternalism and self-interest. The government also played a role. In the 1930s, legislation handed unions more influence and established a federal minimum wage.

While all of this led to improvements in living standards, the corporate world wasn’t happy with